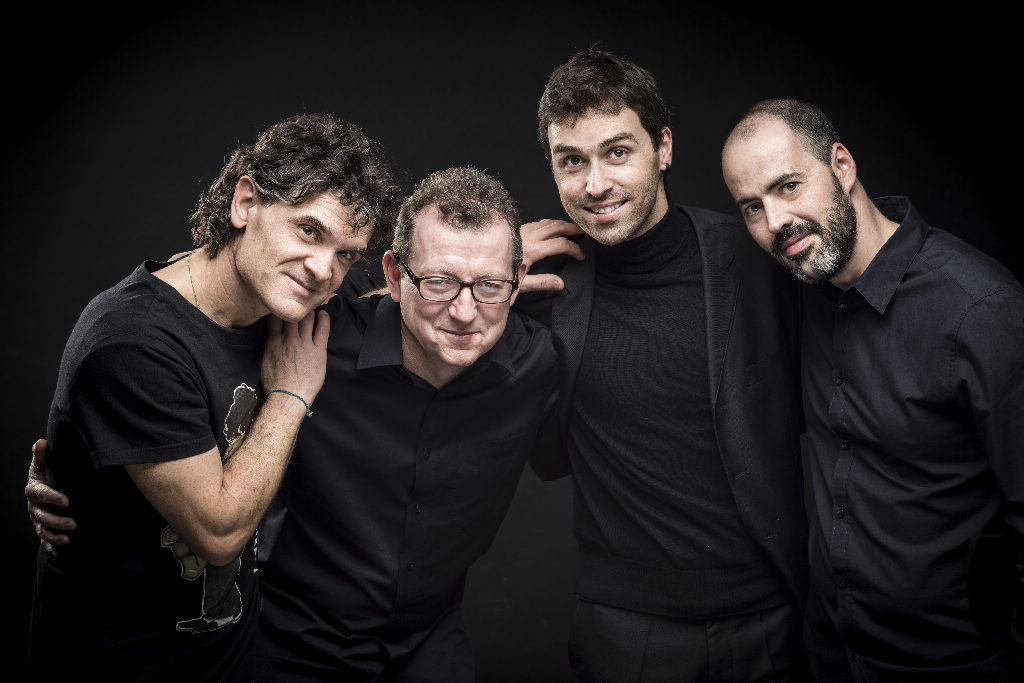 Coming from Ireland, Spain, Italy and Portugal, the Bros Saxophone Quartet sprang from the desire of four friends to fuse their different experiences as soloists in the service of chamber music.

As refined interpreters perfectly identified with their saxophones, they set out on a musical journey whose search issues in multifarious musical places and languages.

It is sensitive virtuosismo, and meaning and emotion, which make the B.S.Q one of the most interesting and innovative ensembles on the international scene.

The fusion of their various musical experiences seemed to them to be the ideal mirror in which to seek a meeting point between emotion, instinct and personal search.

Music has helped to strengthen the friendship between these four friends, confirming once more that it is a very special art without borders and walls, because it lives through its own incredible strength and freedom.

“…Of the many hot tickets of the congress, the much-anticipated performance of Bros Quartet had the audience queuing in the corridors. The charismatic foursome of Gerard McChrystal, Antonio Felipe Belijar, Mario Marzi and João Pedro Silva presented a diverse, energetic and hugely entertaining programme, reflecting the musical background of the four players.”

Gerard McChrystal comes from Derry, N.Ireland. He took up the saxophone as a second study for his RNCM audition in 1982. By 1987 he had made his concerto debut with the RTE Concert Orchestra playing the Dubois concerto live on TV in the final of RTE Musiciaan of the Future. His UK debut was with the Philharmonia in 1989 premiering Out of the Cool  by Dave Heath.

Gerard has performed in 35 countries including USA, China, South Africa, Indonesia, Azerbaijan, Korea, Sweden and all over Europe including Italy, France, Spain and Slovenia. He has recorded albums with BBC NOW, Ulster Orchestra, London Musici, guitarist Craig Ogden, The Smith Quartet, Yan Pascal Tortelier and record labels include Chandos, Signum Records and Silva Screen. He has developed a repertoire of accessible new works, often with a celtic influence some of which have been published in his saxophone series by Camden Music, London and Reed Music, Australia.

Orchestras Gerard has worked with include The Philharmonia, BBC Scottish Symphony Orchestra, BBC Concert Orchestra, National Symphony of Ireland, Stuttgart Staatsorchester and the Orchestra of San Francisco Ballet. Venues include San Francisco Opera House, Baku Opera House, Royal Abert Hall, St David’s Hall, Cardiff, National Concert Hall, Dublin and a longhut in Sarawak, Borneo. His album  Aria was named as one of the best classical CDs of 2011 by Classic FM and was chosen as one of David Mellor’s  Connoiseur’s Choice. It was also RTE Lyric FM’s Album of the week in November 2011.

Gerard was an ambassador for Derry-Londonderry UK City of Culture 2013. His new solo programme InterFuse for saxophone and electronics has won two awards from the Arts Council. In 2014 Gerard premiered a new work for sax and loop station in Ireland. The new work, Mid-term Break was commissioned from Gerard in memory of the poet Seamus Heaney. He has been invited to be on the jury of jury of many international competitions including The Royal Overseas League Competition, London and  The 5th Adolphe Sax International Saxophone Competition, which was held in Dinant in 2010.  In 2015-16 season he will perform in Milan, Paris, Vienna, Lisbon and London.

Selmer Paris chose him for the 1er Tremplin Jeunes 2002-2003. He regularly gives masterclasses in Spain, Portugal and Italy. Antonio is very interested in violin repertoire and transcribes many of the important works. His transcriptions are always caracterized by a faithfulness to the original, even when the performance requires confidence with the altissimo register. He is member of Octavia Saxophone Quartet, Bros. Quartet and musical director of Sax Antiqua, a group of saxophones specialising in early music repertoire.

He is the tenor saxophone of the international quartet,  BROS quartet, had recording the CD “Pagine” by Salvatore Sciarrino, with the Italian label Stradivarius.

He is member of the international saxophone quartet Bros. Quartet, Artemsax Quartet, L.U.M.E. – Lisbon Underground Music Ensemble and Fusion Out (music for saxophone, accordion, electronic and video), with which all it has presented all over Portugal and abroad and edited several CDs.

He is the musical and artistic director of the Metropolitana Saxophone Ensemble, with who has recorded and edited a cd with new original Portuguese music for saxophone ensemble.

João is founding member and Vice-President of the Portuguese Saxophone Association. He takes part of the EURSAX 17 European Saxophone Congress boarding team.

He is saxophone and chamber music professor at the Lisbon Metropolitana Professional Music School and Palmela Regional Conservatory of Palmela. He is normally invited to give masterclass and workshops.

He is the artistic director of FISP – Palmela International Saxophone Festival.

He is Yamaha and D’Addario Woodwinds artist.

He often plays with Riccardo Muti and is regularly invited to join Zubin Mehta and the Orchestra del Maggio Musicale Fiorentino on concert tours. He has played at famous national and international festivals such as the Biennale di Venezia, Settembre Musica, La Scala di Milano, Accademia Filarmonica di Roma and the Ravenna Festival. He has also performed in Salzburg, Athens, Madrid, Saint Petersburg and Mexico City. Important venues include Carnegie Hall, New York, The Suntory Hall, Tokyo, The Gewandhaus, Leipzig, The Musikverein, Vienna, The Schauspielhaus, Berlin, The Lacma Museum, Los Angeles, The Grand National Theatre of China, Beijing, The European Parliament, Brussels, The Ciajkovskij Hall, Moscow and The Liceu, Barcelona.

He devoted himself to 20th century repertoire and some of the most important contemporary works for saxophone are dedicated to him. He has recorded for EMI, Edipan, Stradivarius, Agorà, BMG and Sony Classical. His CD of the major saxophone concertos for soloist and orchestra, which he recorded with G. Verdi Symphony Orchestra conducted by H. Schellemberger, was recently released in Italy by Amadeus and is now internationally released on ARTS (München). He is a Rico endorsee.

He has been on the jury of many international competitions including The 5th Adolphe Sax International Saxophone Competition, which was held in Dinant in 2010. He is the Italian representative for Gerry Mulligan’s Publisher. Mario also is editor of several educational scores for Carisch.

His book Il Saxofono Zecchini Ed. was published in October 2009. 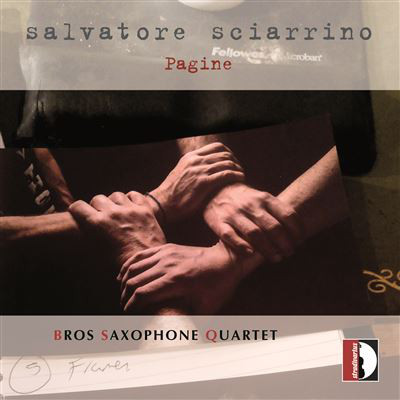 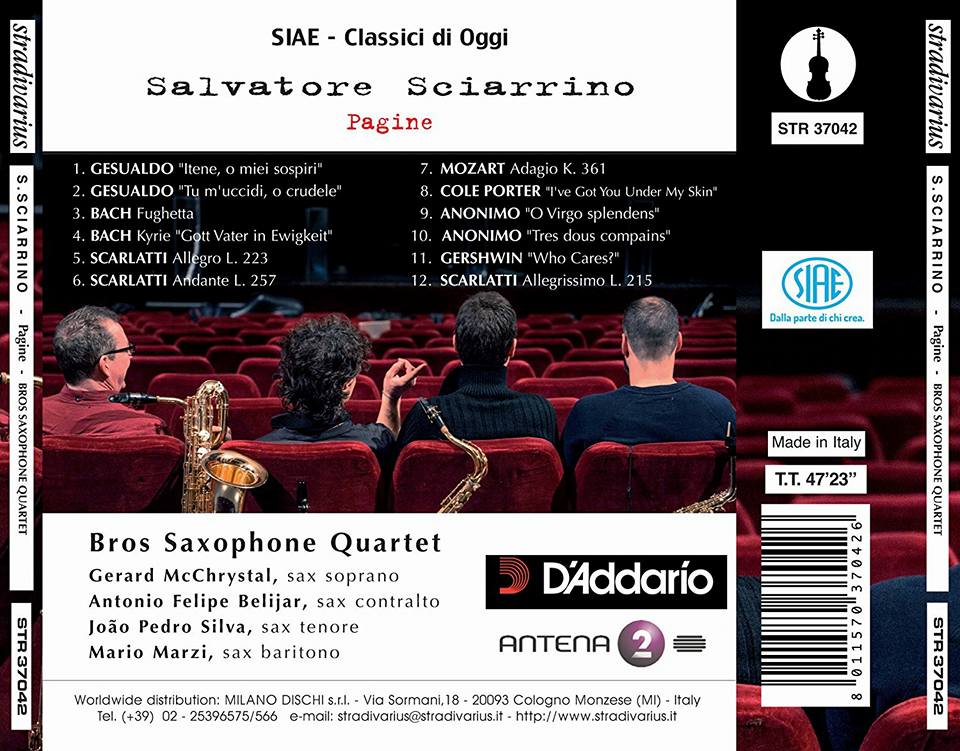