Born in Bologna (Italy), Cristina Zavalloni’s musical background is steeped in jazz, belcanto, and composition. She attended the Conservatorio di Musica “Giovan Battista Martini”, in both singing and composition classes, and also studied classical and modern dance for years.

She has performed with some of the most renowned jazz musicians worldwide such as Jason Moran, Uri Caine, Paolo Fresu and Brazilian musicians such as Hamilton de Hollanda and Guinga.

Since 1993, she collaborates closely with Dutch composer Louis Andriessen, who wrote some of his recent works for her: Passeggiata in tram per l’America e ritorno, La Passione (2002), Inanna (2003), Letter from Cathy (2003), Racconto dall’Inferno (2004), the role of Dante in the opera La Commedia (2008), the monodrama Anaïs Nin (2010) and the role of Sor Juana Ines de la Cruz in the opera Theatre of the World (2016). She has premiered pieces by Carlo Boccadoro, Luca Mosca, Emanuele Casale, Mauro Montalbetti, Cronelis De Bondt, Michael Nyman, James McMillan.

In December she was in New York to record her new CD, The Soul Factor, with Uri Caine and an all-american band.

During the summer, she performs the title role of Carmen secondo Piazza Vittorio at Terme di Caracalla (Opera of Rome).

She gives life to her new jazz quartet, Special Dish.
In 2015 she debuted in Mauro Montalbetti’s latest opera, Corpi eretici. Dramma musicale pasoliniano in 9 canti, she sang Andriessen’s Passione at Koeln’s Philharmonie, she sang in Warsaw’s Royal Castle with pianist Andrea Rebaudengo and in Amsterdam and Utrecht with Ludwig Ensemble, presenting works by Berio and De Falla.

In 2016 she spends several months giving life to the role of Sor Juana in Andriessen’s new opera Theatre of the World (Los Angeles and Amsterdam).

During the summer she teaches at Siena Jazz Summer Clinics and in the fall she premieres Luca Mosca’s American Songs (written for her). She piece is performed at Bologna Festival and at Venice Fondazione Vedova.

Cristina Zavalloni’s discography includes both CD’s under her name and several collaborations. 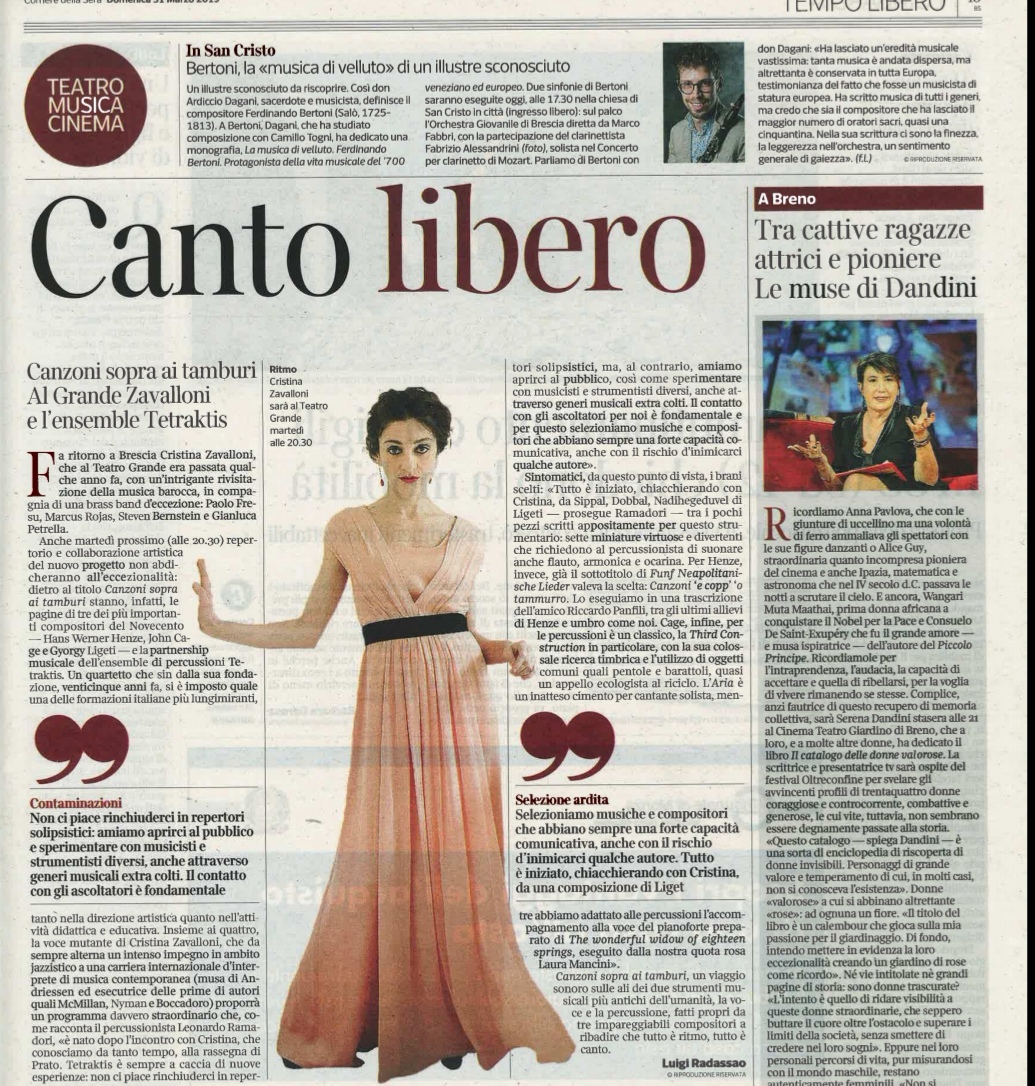 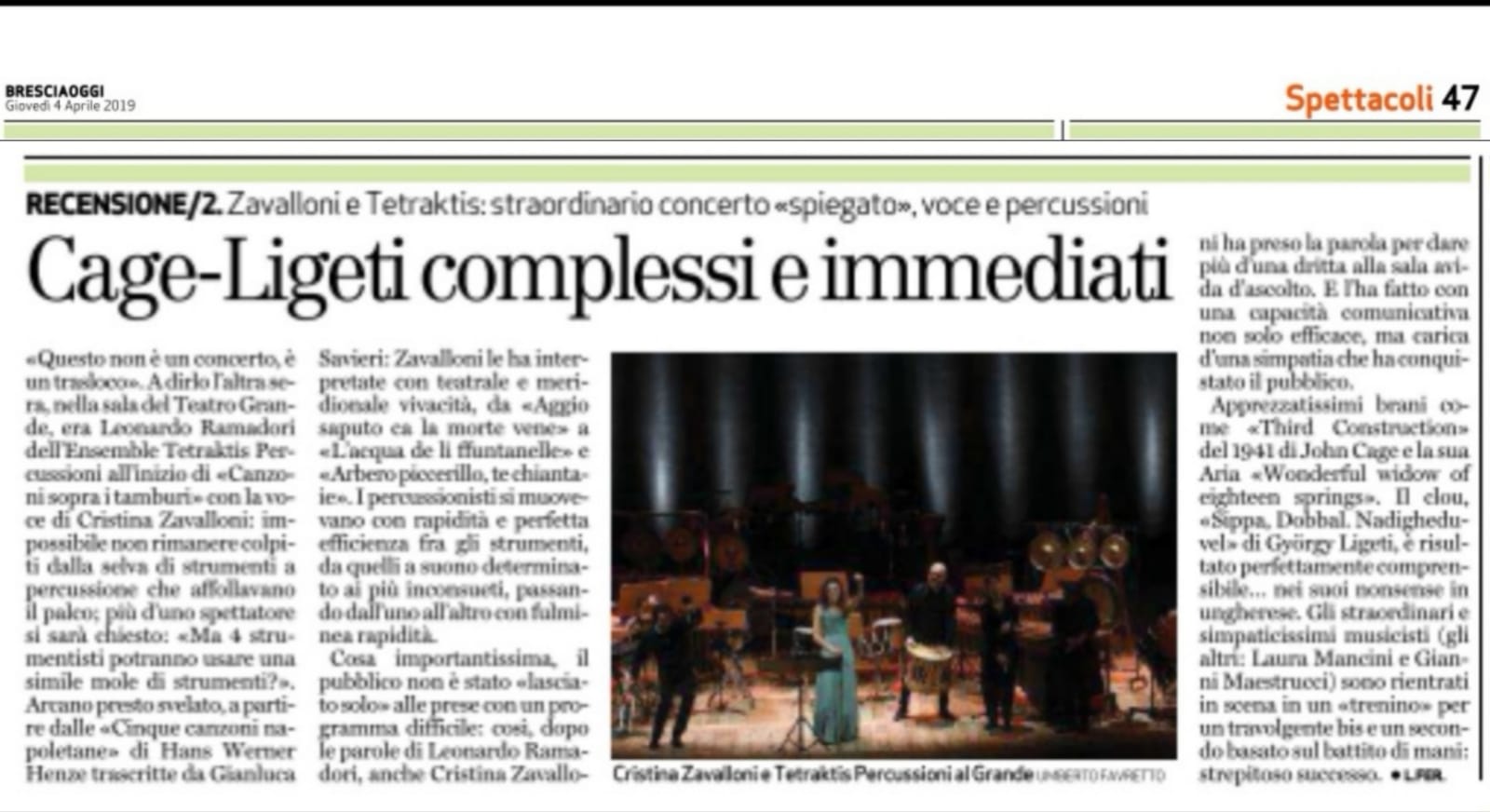 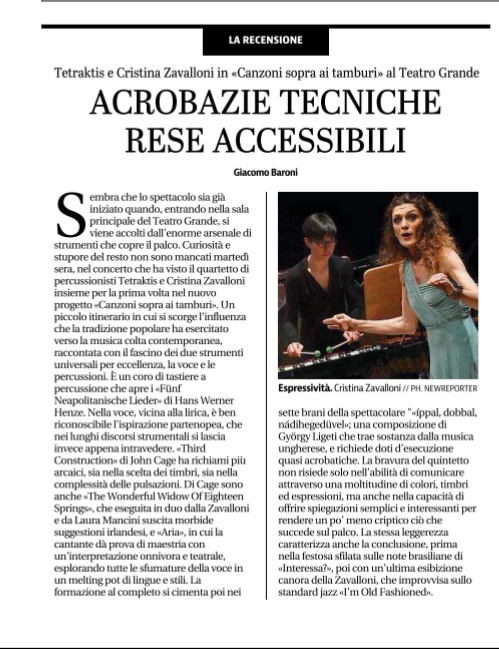 BROS SAXOPHONE QUARTET
Scorrere verso l’alto
This site uses cookies to provide you services in line with your preferences. If you want more information about using and accepting cookies click here.Ok