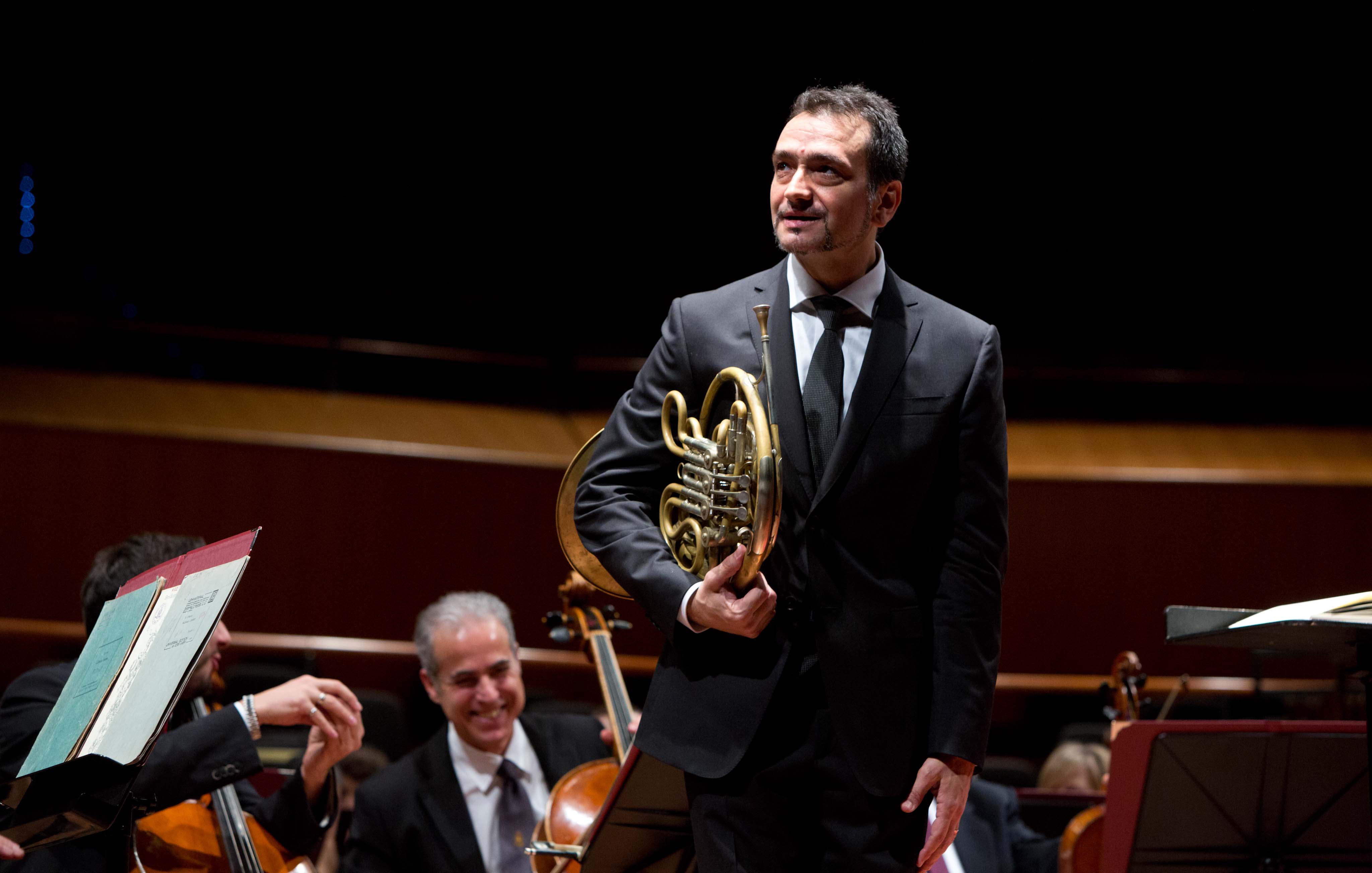 French horn virtuoso ALESSIO ALLEGRINI is one of Europe’s most sought-after solo and orchestral performers. Born in Sabina on the outskirts of Rome, at 23 Alessio won the position of solo horn with La Scala under the direction of Riccardo Muti, where he served from 1995-2002. A prize winner of both the ARD Munich Horn and Prague Spring competitions, he made his debut as solo horn with the Berlin Philharmonic under the baton of Claudio Abbado in 2000, and was subsequently invited as guest solo horn for an entire season. Esteemed for his solo horn performances of the symphonic repertoire, Alessio has worked with many of the world’s pre-eminent conductors, including Carlo Maria Giulini, Pierre Boulez, Daniel Barenboim, Wolfgang Sawallisch, Lorin Maazel, Marek Janowski, Myung-Whun Chung, Mariss Jansons, Valery Gergiev, Simon Rattle, Antonio Pappano, Riccardo Muti.
Alessio has performed Britten’s Serenade for Tenor, Horn, and Strings with Ian Bostridge, Brahm’s Horn Trio with Salvatore Accardo, and the Mozart horn concertos with Orchestra Mozart and Claudio Abbado. Performances of the concerto literature have included appearances with the Bayerischer Rundfunk Orchester, and the orchestras of La Scala, La Fenice, and Santa Cecilia in Rome, in addition to first horn engagements with the Lucerne Festival Orchestra, the Chamber Orchestra of Europe, and the Mahler Chamber Orchestra.

Alessio’s discography includes La Grande Fanfare: an album of chamber music with I Solisti della Scala Milano (Tudor Records), as well as DVD recordings of Mahler Symphonies 3, 6, and 7 with the Lucerne Festival Orchestra under Claudio Abbado. He appeared in the documentary L’altra voce della Musica following the travel of Claudia Abbado between Havana and Caracas, as well as in the movie Rhythm Is It, featuring the Berlin Philharmonic under Simon Rattle. His forthcoming collaboration with Orchestra Mozart under Abbado will culminate in the live recording of the complete Mozart horn concertos for Deutsche Grammophon, as well as a DVD of Bach’s second Brandenburg concerto.
Alessio studied with Professor Michael Holtzel at the Hochschule fur Musik in Detmold, Germany. He was awarded the top qualifying score in his appointment as Professor at the National Conservatory of Santa Cecilia. He also has a special bond with Japan, inspired by the longstanding friendship between his family and sociology professor Shizuo Matsumoto (formerly of Osaka University).

Winner of prizes in both the Prague Spring International Competition and the Munich International Competition, he held the first chair in the Orchestra of La Scala for eight years, and subsequently served as guest principal horn of the Berlin Philharmonic for a year. For many years he was also principal horn of the Orchestra Mozart under Claudio Abbado, which culminated in the live recording of the complete Mozart’s Horn concertos, Sinfonia Concertante, and Bach’s second Brandenburg concerto for Deutsche Grammophon.

As a soloist, he premiered Carter’s Horn Concerto in Europe and played the most important horn concerto repertoire. His cncerto engagements include Orchestra  Filarmonica della Scala, Orchestra da Camera di Mantova, Philhamonie Baden-Baden, Orchestra Teatro Petruzzelli Bari, Hamburger Symphoniker, Filarmonica Teatro La Fenice, Orchestra of Teatro Lirico in Cagliari, Filarmonica Marchigiana, Hiroshima Symphony, Nagoya Philharmonic Orchestra, Tokyo City Philarmonic Orchestra, Lausanne Chamber Orchestra.
He made his debut as a conductor at the Teatro Lirico in Cagliari with a symphonic concert with Wagner and Brahms compositions, which was highly acclaimed. In 2017  he played and conducted the Orchestra Filarmonica Marchigiana and I Solisti Aquilani and in the season 2018, he appeared as a conductor with the Hamburger Symphoniker to replace Maestro Jeffrey Tate (Elger, Haydn and Beethoven), and leaded the Lausanne Chamber Orchestra (Haydn and Beethoven) and Tokyo City Philharmonic Orchestra (All Mozart Concertos).
Since 2004, Mr. Allegrini has been the solo principal horn of the Orchestra of the Academy of Santa Cecilia in Rome. He also is the solo first horn of the Lucerne Festival Orchestra.

Allegrini can take the spotlight because he is an exceptional artist…Abbado’s resilient rhythms and themes shrewdly differentiated in the first movement of K417 offer Allegrini a framework for remarkably secure playing. Remarkably varied in colour too, changing cast as the music modulates

[Allegrini] is certainly a suave instrumentalist, while once again Abbado conducts with a wonderfully light touch. The orchestra and Allegrini all play modern instruments, but there’s a period sensibility about the way the textures are balanced and the phrasing shaped.

[Allegrini’s] tone is full but flexible, sustained but lyrical, and he manages to impart a certain wistfulness to even the jolliest rondos…The orchestra…throughout, is a model of sophistication. 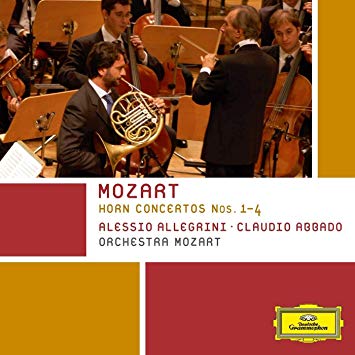 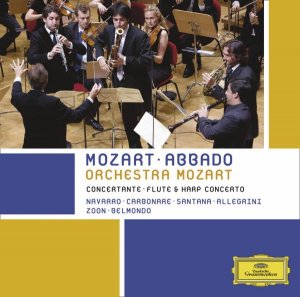 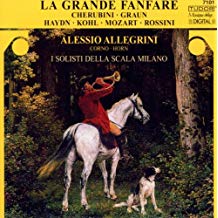 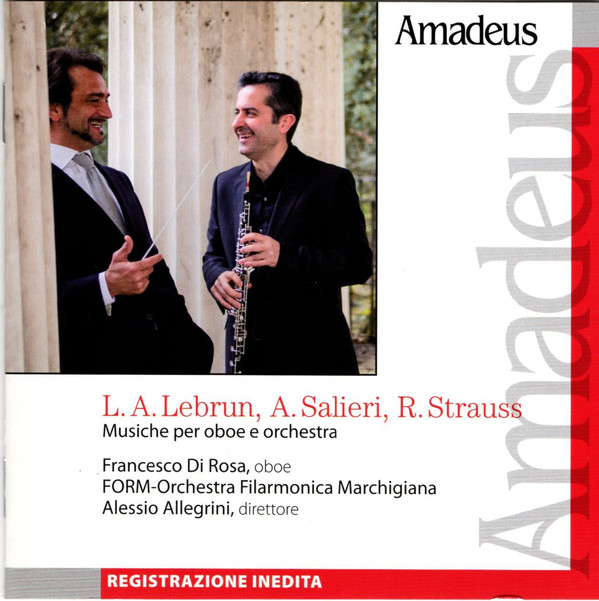 SONATORI DE LA GIOIOSA MARCA
Scorrere verso l’alto
This site uses cookies to provide you services in line with your preferences. If you want more information about using and accepting cookies click here.Ok